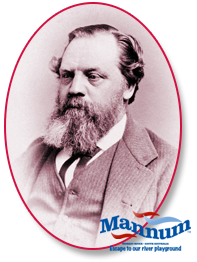 W. R. Randell built the first paddle steamer to ply the River Murray – the ‘Mary Ann’. Born in England, he was the son of a Gumeracha miller. The needs of pastoralists along the river enabled him to develop a thriving freight business. Randell built the Woolshed, the first building in Mannum, in 1854. He subdivided land, brought the Mannum Dock from Milang, and was largely responsible for the present location of Mannum, for the town grew up around his business.