Before settlers came to Mannum, the area was inhabited by the Narraltie Aboriginal group who lived in wurleys alongside the river. There are many explanations of the name “Mannum”, but the one favoured by the local Aboriginal community is “the place of many ducks”. Evidence of past groups goes back six thousand years and more, as in 1929 a boy’s skeleton was found four miles downstream from Nildottie. The boy died when twelve years old and was found to have eaten a species of mussel long since extinct. He was a member of the Negrito tribe. Weapons and tools found with him were associated only with fossils at least 6,500 years old.

Captain Sturt sailed past the present site of Mannum in 1830 and proved on that trip that the Murray Darling system terminated at the sea. Ten years later James Henderson produced The Thirty Nine Sections Special Survey, which made available land for lease in the area. The first lease was taken up by the well-known explorer, Edward John Eyre. In 1851 pastoral leases classed as “Waste Land of the Crown” were 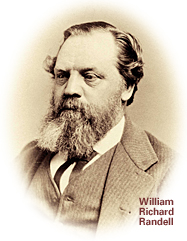 issued and William Beavis Randell leased 34 square miles from the present Dry Dock area stretching eight and a half miles upstream. He gave his land the name “Noa No”. George Dunn and John Baker also took up leases at an annual rent of 15 shillings a square mile. In 1853 the Hundred of Murray was proclaimed and many new settlers took up leases, most running cattle on their land.

William B. Randell’s son, William Richard worked at his father’s flourmill in Gumeracha, but dreamed of building a paddle-steamer and using it to trade on the River Murray. He, and his brother, Thomas George, together with a carpenter, built the frame and transported it to their father’s river property by bullock cart. There, they finished it and named it the ‘Mary Ann’ after their mother. It was to become the first paddle-steamer to ply the River Murray, but was closely followed by the first of a fleet of ships run by Captain Cadell.

To service his growing trade, William R. Randell built the Woolshed, the first building in Mannum. He and his brothers built houses for themselves during the next decade, and slowly the town began to develop around this area. Ben Baseby arrived in town, and Carl T. Pollack, a tinsmith from Adelaide bought sections of what is now Randell Street. In 1864, a government survey identified an area downstream as the site of the new town, but despite this, Mannum continued to develop in its original position. 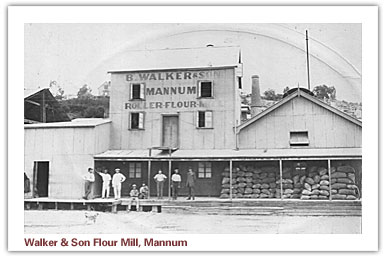 With a growing paddle-steamer industry and continual sub-division of land, many new settlers set up businesses to service the town. Among them were butchers, bakers, blacksmiths, saddlers, millers, postmen and watchmakers. The Shearer brothers began their agricultural manufacturing business in 1877, and at its peak, it employed four hundred workers, selling out to Horwood Bagshaw in 1972. Among the Shearers’ achievements was the Shearer Car, the first car in Australia with a differential. It took to the streets in 1897, according to David Shearer, and, powered by steam, frightened the local residents and horses alike. The firm is also credited with revolutionizing farming, producing the first Shearer stripper in 1883, and designing a number of machines to help the farmer tend his land.

The Aboriginal community helped the settlers when they first arrived, but by the 1890’s was finding life difficult. There were fifty five people residing on the banks of the river opposite the town when Janet Matthews and Esther Cartwright set up a tent stitched from flour bags among them in 1899. The mission was moved to a site three miles upstream from Walker Flat in 1901. The community was eventually either absorbed into 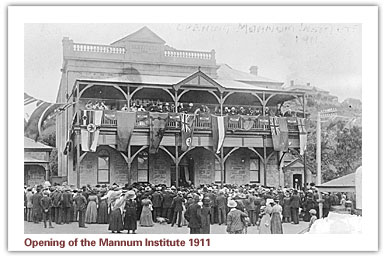 the Gerard Aboriginal Settlement or moved to other areas in the region. Some families came back to Mannum, as in the 1920’s and 30’s there were three Aboriginal camps at Cowirra behind a dairy farm belonging to Jack Ledo. What happened to them later is not clear.

Captain Arnold worked alongside the Randells in the paddle-steamer industry before buying the Dry Dock in 1913. He was instrumental in negotiating contracts to ship wheat during the war, and also built boats to be used in the River Locks programme. Arnold’s shipping company was responsible for employing many men, and when the river trade began to fail, due to the coming of the railway and the provision of much improved road transport, it must have caused a lot of distress to many families.

Mannum’s early pioneers were very community minded, and many provided land, money and time to help the town. Arnold, for example, provided land for the hospital, and a glance at the names on early committees shows the dedication of our founding fathers to a variety of philanthropic activities, including local churches, the Showgrounds, the Institute, schools and the Council.

It is easy to assume that Mannum, once the paddle-steamer trade had died, would lose its attraction for local residents. Indeed, many services were destined to fade into the past – not only in Mannum, but world wide: there are very few saddlers and blacksmiths operating today. The town has re-invented itself, however, and is now a thriving tourist destination. It boasts a thriving accommodation and 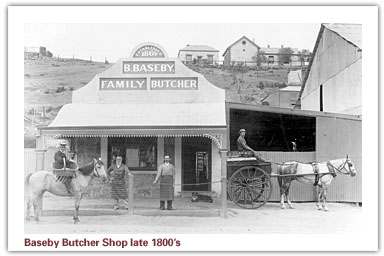 houseboat industry, and is lucky to have retained many of its original buildings in the main street named after William Randell. These host a variety of interesting shops designed to appeal to residents and tourists alike who can also enjoy excellent coffee and meals in the many eating places.

The Mary Ann Reserve gives visitors an excellent picnic area on the banks of the river, and cruising boats calling at the wharf include the ‘Murray Princess’ and ‘Four Knots Cruises’. The town’s Museum is home to the restored and fully operational Paddle-Steamer Marion and includes the Dry Dock and displays of River History, as well as the well appointed and accredited Visitor Information Centre. The town has a number of businesses dedicated to keeping the car or caravan on the road, and two petrol stations. Residents are employed in these service industries, as well as in local manufacturing and farming.

The 1956 Mannum floods occurred due to higher than average rainfalls in Western Queensland along with heavy rains three months prior in the Murray catchment areas such as the Murrumbidgee and Lachlan Rivers. The floods peaked at 12.3 metres in Morgan. Some areas were flooded up to 100 km from the natural flow of the river. Mannum was devastated by the floods that had a major impact on the town at the time.

For more information on Mannum history and the beautiful PS Marion visit psmarion.com.