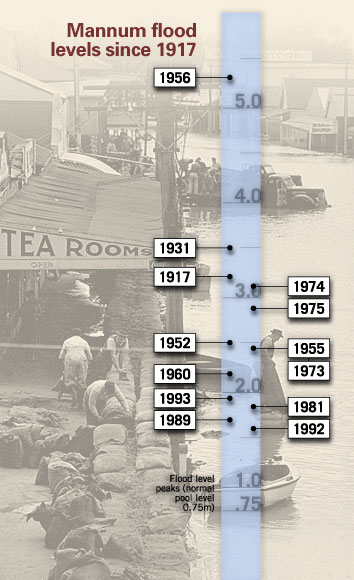 The Murray River floods are an essential element in the ecological system.

Bird life, fish breeding and growth of trees and shrubs require periodical floods to sustain their place in the life system surrounding the river environs. Unfortunately, major floods have also been disastrous to the modern economy along the river.

River dwellers, farmers and business people have seen their homes and properties submerged and often damaged beyond repair. Big floods mean great trauma to some people and they often do not recover.

The 1956 Murray River flood is considered to be the greatest catastrophe in South Australia’s history and is the largest flood ever recorded in the state. 1917, 1931 and the floods of the nineteenth century had been large, but nothing like this. The flood occurred due to excessive, heavy rains in Queensland, New South Wales and Victoria which supplied the interstate farmers with more than enough to irrigate their crops. The Murray and the Darling were both in flood at the same time and the swelling excess water made its way to South Australia. Main river towns suffered enormously with much of the commercial and residential areas submerged for several months. The flood waters hit Mannum in July 1956.

Mud and debris were deposited everywhere and smelt horrible.

Six hundred homes in the district were flooded, as well as two hundred holiday shacks. Some were totally destroyed. The ferry was out of operation for over six months and new roads had to be built on higher ground above the flood level. Children were ferried across the river in a boat to get to school and the bus was kept on the Cowirra side of the river. Many of the businesses operating on Randell Street were devastated. The bowling green was underwater, the bakery was temporarily relocated to Adelaide Road and men had to row their boats to the pubs which were serving from bars on the first floor.

However, life went on as close to normal as possible. Rowers trained in Mannum’s main street.

Further up river, orchardists lost trees and vines. These had to be replanted and the owners lost several years income. At the height of the 1956 flood an estimated 15000 people visited Mannum in one day just to see the flood. – disasters seem to attract the crowds.

The Museum’s street scene is set up to recreate Mannum’s main street, Randell Street. Photographic records show major floods of 1890, 1917, 1931 and the biggest and most recent major flood of 1956, including television footage and stories from the newspapers of the day.